Hawaii Sex Offenders Law protects the citizens of the state from sex offenders living in Hawaii. The Law subjects all sex offenders in Hawaii to mandatory registration. Sex offenders register with the office of the Attorney General of the State.

The timeframe for registration depends on the nature of crime. Registration may last a few years or for a lifetime.

The state criminal’s department makes sure the public are aware of the dangers of sex offenders in their community.

Hawaii sex offender’s registry works with the state’s criminal department to register sex offenders in Hawaii. The Registry also verifies the information by sex offenders to make sure they are accurate.

The Registry stores this information and makes them to the public available through the internet.

Identify Nearby Sex Offenders in Hawaii 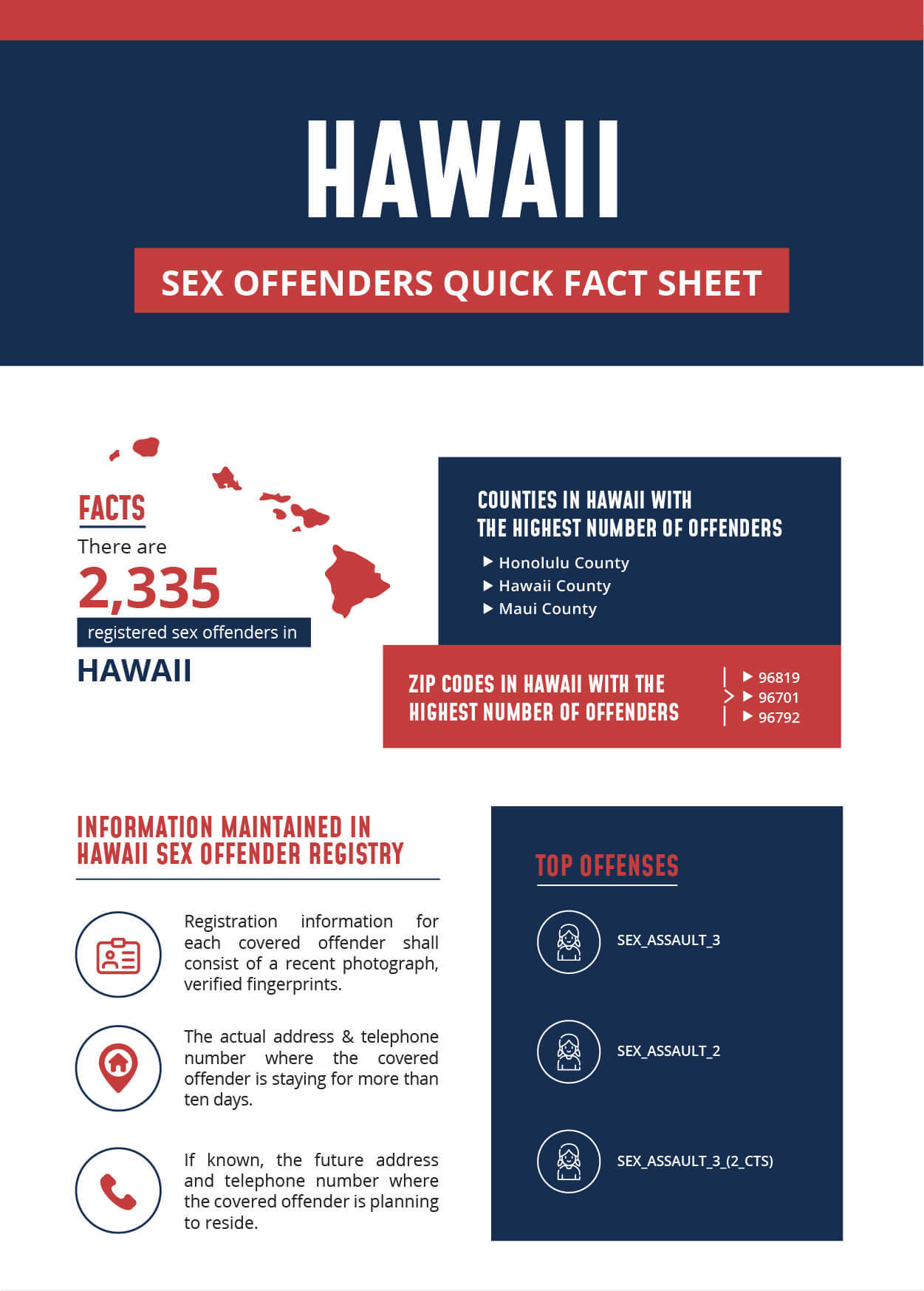 Learn and share vital facts and figures about Hawaii sex offenders with this convenient infographic.

Counties in Hawaii with the highest number of offenders:

Zip Codes in Hawaii with the highest number of offenders:

(3) The actual address and telephone number where the covered offender is staying for more than ten days, if other than the stated residence;

(4) If known, the future address and telephone number where the covered offender is planning to reside, if other than the stated residence;

(5) Names and, if known, actual business addresses of current and known future employers and the starting and ending dates of any such employment;

(6) Names and actual addresses of current and known future educational institutions with which the covered offender is affiliated in any way, whether or not compensated, including but not limited to affiliation as a faculty member, an employee, or a student, and the starting and ending dates of any such affiliation

(7) The year, make, model, color, and license number of all vehicles currently owned or operated by the

(8) A statement listing all covered offenses for which the covered offender has been convicted or found unfit to proceed or acquitted under chapter 704;

(9) A statement indicating whether the covered offender has received or is currently receiving treatment ordered by a court of competent jurisdiction or by the Hawaii paroling authority;

(10) A statement indicating whether the covered offender is a United States citizen; and

(11) Any additional identifying information about the covered offender.

(a) Registration information shall be disclosed as follows:

(2) The information shall be disclosed to government agencies conducting confidential background checks;

(3) The attorney general and any county police department shall release public information.

(d) The following methods shall accomplish public access authorized by this section:

(1) Public access to the public information for each covered offender subject to subsection (c), paragraphs (1) through (4) shall be provided by both public Internet access and on-site public access or;

(a) Sex offenders must register for life.

View Registered Sex Offenders in Your Hawaii ZIP Code Below