The U.S. Congress and individual states have passed various laws that require states to monitor registered sex offenders. These laws include but are not limited to, the Jacob Wetterling Crimes Against Children Act, the Pam Lychner Sex Offender Tracking and Identification Act, and Megan's Law.

On March 5, 2003, The Supreme Court rules that states may continue posting information about registered sex offenders on the Internet.

Every 8 minutes, Child Protective Services finds evidence for or substantiated, a claim of child sexual abuse.

One in 9 girls and 1 in 53 boys under the age of 18 experience sexual abuse or assault at the hands of an adult.

Females ages 16-19 are four times more likely than the general population to be victims of rape, attempted rape, or sexual assault.

The majority of sexual assaults occur at or near the victim's home. What was the survivor doing when the crime occurred?

More than 50% of all alleged rapists have at least one prior conviction.

RegisteredOffenderList.org is a single source to learn about each state's laws and rules about sex offenders, convictions requiring registration, and public access to sex offender information. 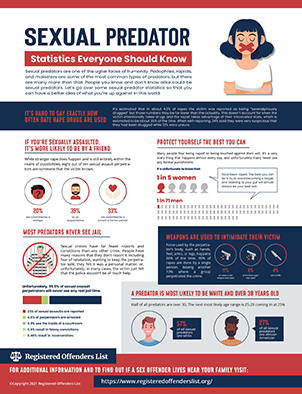 Learn and share vital facts and figures about sex offenders with this convenient sexual predator infographic.