Minnesota Sex Offender Law protects the residents of Minnesota from the menace of sex offenders. The law requires persons convicted of certain sex crimes in the state to register as a predatory sex offender.

Duration of registration depends on the nature of the offense, determined by the law. This information alerts residents of Minnesota on sex offenders living in their community. Registered sex offenders must report any changes to their registration immediately to the police.

The law covered persons who wish to live, work or school in Minnesota but convicted for a sex offense in another state.

The Minnesota Sex Offender Registry stores all information on sex offenders in the state. The registry is in charge of collecting and updating the state’s sex offender’s database.

Identify Nearby Sex Offenders in Minnesota 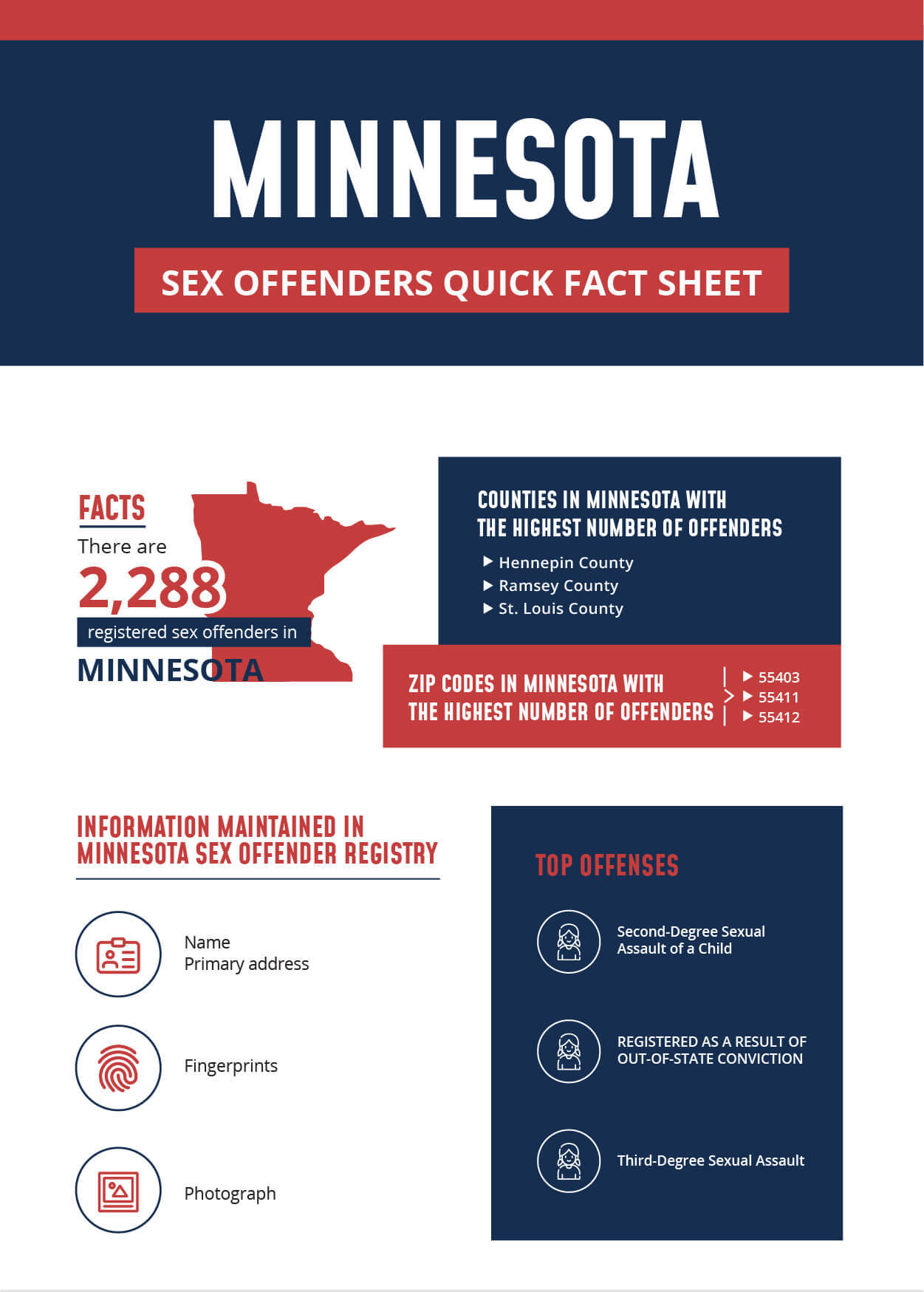 Learn and share vital facts and figures about Minnesota sex offenders with this convenient infographic.

Counties in Minnesota with the highest number of offenders:

Zip Codes in Minnesota with the highest number of offenders:

(a) The person was charged with or petitioned for a felony violation of or attempt to violate, or aiding, abetting, or conspiracy to commit, any of the following, and convicted of or adjudicated delinquent for that offense or another offense arising out of the same set of circumstances.

(b) The person was charged with or petitioned for a violation of, or attempt to violate or aiding, abetting, or conspiracy to commit, any of the following and convicted of or adjudicated delinquent for that offense or another offense arising out of the same set of circumstances:

(b) The law enforcement agency shall employ the following guidelines in determining the scope of disclosure made under this subdivision:

(3) If the offender is assigned to risk level III, the agency shall disclose the information to the persons and entities described in clauses (1) and (2) and to other members of the community whom the offender is likely to encounter.

(c) "likely to encounter" means that:

(1) The organizations or community members are in a location or near a location where the offender lives or is employed, or which the offender visits or is likely to visit on a regular basis, other than the location of the offender's outpatient treatment program; and

(2) The types of interaction which ordinarily occur at that location and other circumstances indicate that contact with the offender is reasonably certain.

Subd. 4b. The commissioner of corrections shall create and maintain an Internet Web site and post on the site the information about offenders assigned to risk level III forwarded by law enforcement.

Subd. 6. 10 years for sex offenders not subject to lifetime registration.

Immediately upon release; before entering state if accepted while on parole/probation; 5 days before changing address; out of state offenders no longer under supervision have 30 days after moving into the state

Yes, if on parole/probation; acceptance of an offender under the interstate agreement is conditional on offender registering, and other requirements; those convicted in last 10 years

No, but local law enforcement is asked to verify offender's reported address physically

View Registered Sex Offenders in Your Minnesota ZIP Code Below