According to the law, a sex offender who stays in Vermont for 10 straight days now lives in the state. The offender will have to register in the state if convicted in another state on or after July 1, 1995.

Sex offenders with the intent of living, attending school, or working in Vermont must register in the state.

Sex offenders in Vermont must report any change to the registered information within 24 hours.

A sex offender registered in Vermont but who wishes to move to another state must inform the VCIC about his/her plans. Such an offender must submit their new address to the Vermont Crime Information Center (VCIC). He/she must also register with the Sex Offender Register of the new state within 3 days of relocation.

Identify Nearby Sex Offenders in Vermont 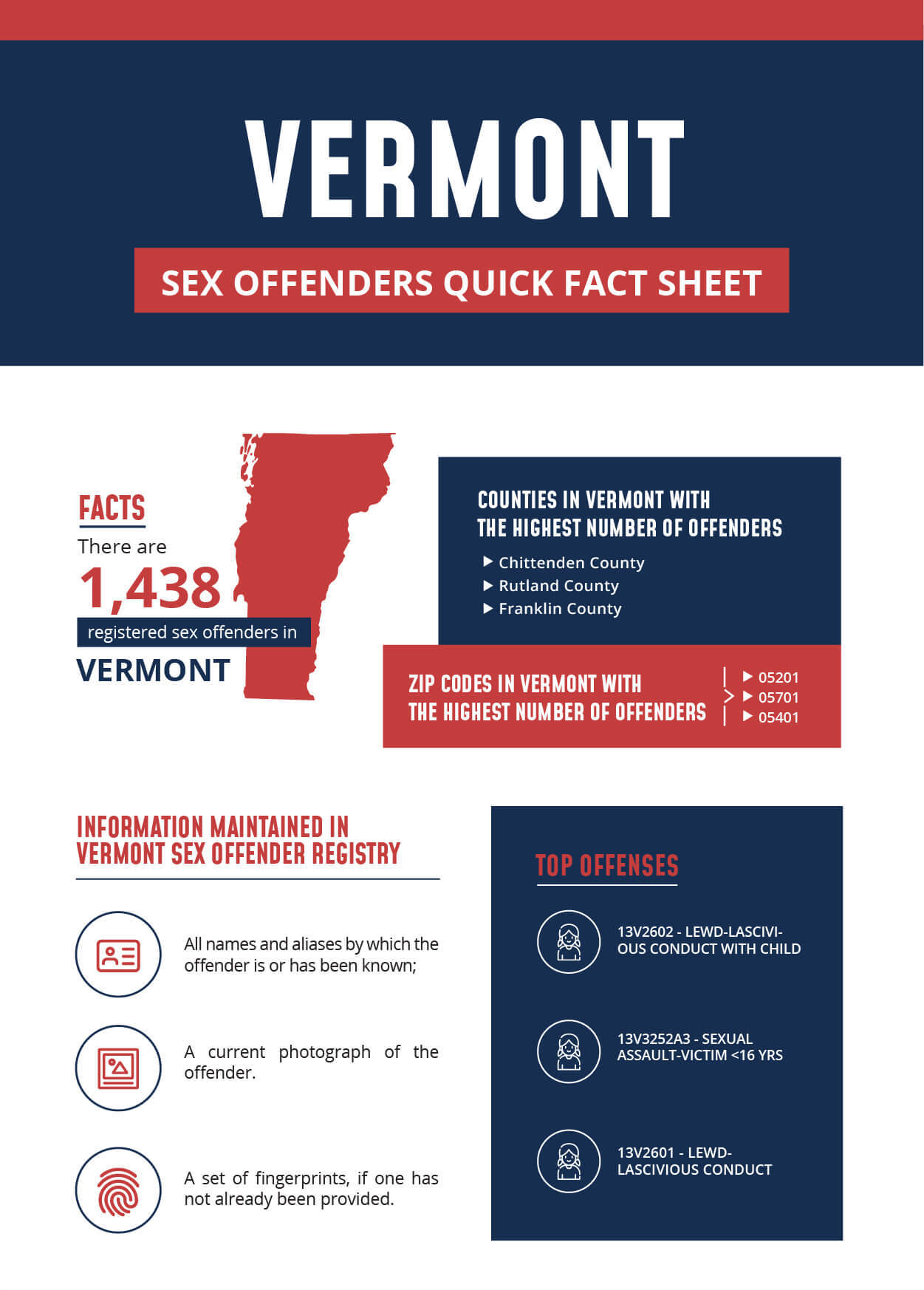 Learn and share vital facts and figures about Vermont sex offenders with this convenient infographic.

Counties in Vermont with the highest number of offenders:

Zip Codes in Vermont with the highest number of offenders:

A person who is convicted of any of the following offenses against a victim who is a minor, except that, for purposes of this subdivision, conduct which is criminal only because of the age of the victim shall not be considered an offense for purposes of the registry if the perpetrator is under the age of 18:

(a) Upon conviction and before sentencing, the court shall order the sex offender to provide the court with the following information, which the court shall forward to the department forthwith:­

(c) (1) Except as provided for in subsection (e) of this section, upon request of a member of the public about a specific person, the department, the department of corrections, and any authorized local law enforcement agency shall release registry information on sex offenders whose information is required to be posted on the internet.

The department shall electronically post information on the internet regarding the following sex offenders, upon their release from confinement:

(8) Sex offenders who have been convicted of an aggravated sexual assault, lewd or lascivious conduct with the child if the offender has been designated as high risk by the department of corrections or kidnapping and sexual assault of a child

(9) Sex offenders who have at least one prior conviction for an offense described in subdivision 5401(10) of this subchapter.

(10) Sex offenders who have failed to comply with sex offender registration requirements and for whose arrest there is an outstanding warrant for such noncompliance. Information on offenders shall remain on the internet only while the warrant is outstanding.

(11) Sex offenders who have been designated as sexual predators.

(13) Sex offenders who have been designated by the department of corrections as high-risk.

10 years for persons not subject to lifetime registration.

Yes, the department shall update the record at least every 3 months

View Registered Sex Offenders in Your Vermont ZIP Code Below